By: HeadlineNews
In: News
With: 0 Comments


Companies waited Monday to see how China will retaliate for U.S. President Donald Trump’s escalation of a fight over technology and trade that threatens to disrupt a Chinese economic recovery.

Beijing threatened “necessary countermeasures” for Trump’s tariff hikes Friday on $200 billion US of Chinese imports. But three days later, in a break with previous tit-for-tat penalties imposed immediately, China had yet to announce what it might do.

A spokesperson for China’s foreign ministry said Monday that he had no details about Chinese plans or high-level contacts since negotiations ended Friday without a deal.

“We are determined and capable of safeguarding our legitimate rights and interests,” said the spokesperson, Geng Shuang. “We hope the United States will meet China halfway to address each other’s legitimate concerns.”

Beijing is running out of imports for penalties due to the lopsided U.S.-Chinese trade balance. Regulators have started targeting American companies in China by slowing down customs clearance for shipments and issuance of business licenses.

Officials appeared to be studying the potential impact on China’s economy before picking their next steps, said Jake Parker, vice-president of the U.S.-China Business Council, an industry group. He said officials might be worried companies may shift operations out of China in response to “aggressive retaliatory actions.”

“I assume this goes fairly high within China’s government before retaliatory actions are settled upon,” said Parker.

No word on progress

The latest talks ended Friday with no word of progress after Washington accused Beijing of trying to backtrack on earlier commitments.

The chief Chinese envoy, Vice-Premier Liu He, told state TV the remaining issues had to do with principles and “we will make no concessions on matters of principle.”

Washington wants Beijing to roll back plans for government-led creation of Chinese global competitors in robotics and other technology that its trading partners say violate its free-trade commitments.

A stumbling block has been U.S. insistence on an enforcement mechanism with penalties to ensure Beijing carries out its commitments. Economists say Chinese leaders probably reject that as a violation of Chinese sovereignty. 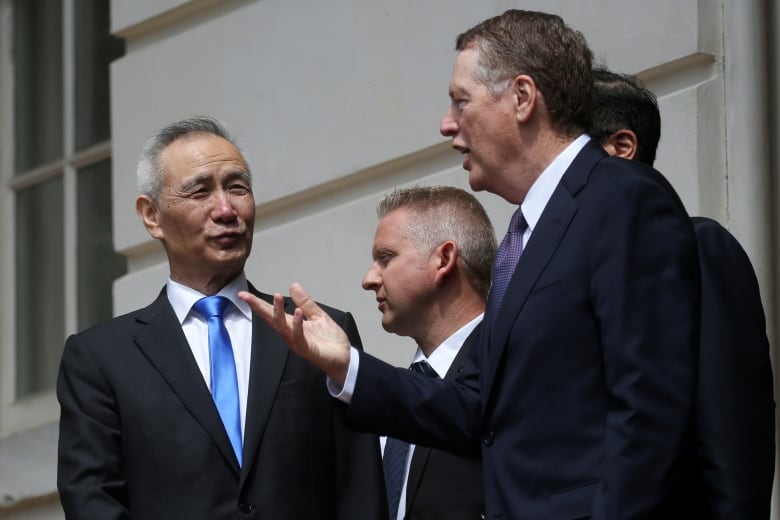 Beijing matched Trump’s earlier 25 per cent tariff on $50 billion of American goods. It imposed 10 per cent charges on $60 billion of imports but left other goods unaffected, possibly out of concern for Chinese companies that depend on U.S. technology and components.

Forecasters warned Friday’s hikes could disrupt a Chinese recovery that appeared to be gaining traction. Growth in the world’s second-largest economy held steady at 6.4 per cent over a year earlier in the latest quarter, supported by higher government spending and bank lending.

The latest U.S. charges could knock 0.5 percentage points off annual Chinese economic growth, economists said. They said that loss could widen to one percentage point if both sides extend penalties to all of each other’s exports. That would push annual growth below six per cent, raising the risk of politically dangerous job losses.

UBS economists said they believed Beijing might raise tariffs on $60 billion of U.S. goods and cancel an agreement to postpone a duty increase on imported American autos while the two sides negotiated.

“The risk of a full blown trade war has materially increased,” they said in a report.

The UBS analysts said the next escalation could come in as little as one month as U.S. regulators prepare to follow through on Trump’s threat to extend penalty tariffs to all Chinese goods.

State media tried to reassure Chinese companies and consumers the ruling Communist Party has the resources and policy tools to respond.

“There is nothing to be afraid of,” said the party newspaper People’s Daily. “The U.S.-instigated trade war against China is just a hurdle in China’s development process. It is no big deal.”

Makers of clothing and furniture were already shifting production to Southeast Asia due to rising Chinese wages. Business groups say that exodus is accelerating as some other companies shift production of goods for the U.S. market to other countries. Economists say more might follow to reduce the risk of American tariff hikes.

The abruptness of Trump’s May 5 announcement made companies see doing business in China as more uncertain, said Parker of the U.S.-China Business Council.

No matter what Washington and Beijing decide, “there is an enormous risk in the background that tariffs could come back into play at any moment,” he said.