In a bid to address margin compression and in anticipation of demand pick-up, domestic primary steel producers have raised product prices by 2.5-3 per cent for December.


“Since margins have become unsustainable, cost pressures versus the steel product price is not helping producers meet ends. This is the primary reason for the product price hike this month (December),” Jayant Acharya, director (commercial & marketing) at JSW Steel told Business Standard.


The December price hike is happening for the second consecutive month. In November, producers raised steel product prices between Rs 500 a tonne and Rs 1,000 a tonne, after a gap of about six months.


While steel producers expect the market to embrace price hike, industry officials are of the view that the consumer is not ready and continuous hikes of this kind may not be sustainable.


“There is absolutely no demand from the infrastructure segment. Also, the auto demand was good only in the festive month of October. Overall, there are no strong demand indicators as of now for steel. Continuous price hikes in such a scenario may be difficult to sustain,” a Mumbai-based trader said.


The index of eight core infrastructure industries contracted 5.8 per cent for October 2019, which was its lowest level since the construction of the index with 2011-12 as the base year. Among the eight segments, the steel industry witnessed a 1.6 per cent fall in October, worse than a 1.5 per cent drop in September. In October last year, the steel industry had witnessed 2.4 per cent growth.


Meanwhile, steel producers have sealed half-yearly contracts for the auto segment factoring in the recent fall in steel prices. “There is a reduction from H1 (the first half of the year) to H2 (the second half). However, the numbers (quantum) are different from customer to customer, so I wouldn’t like to give a single (price reduction) number,” said Acharya. 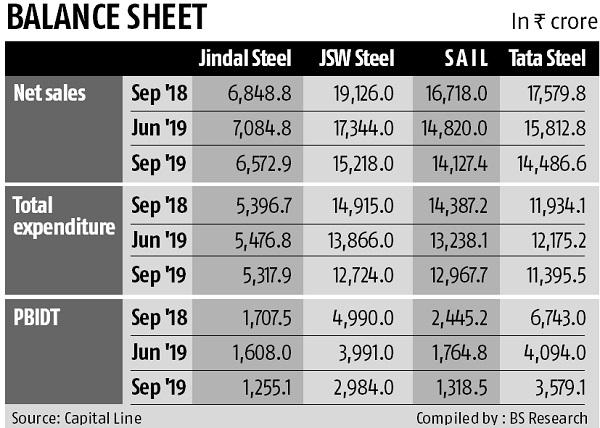 While some players had said the price cut was by Rs 6,000 a tonne, others were of the view that the overall domestic steel price drop was sharper, close to Rs 8,000 a tonne, in the last three to four months, and hence contracts could have closed at much lower price levels.


On the inventory front, too, the view of the producers differed from that of industry officials.


At one end, Acharya of JSW Steel said: “Inventory-wise, the industry is in a comfortable position as the producers have lowered their production which helped inventory dilution. Even the channel inventories have come down. Exports have also helped bring down inventories.”


According to the Joint Plant Committee data, India’s steel exports during April-September this year rose 22 per cent year-on-year to almost 4 million tonnes.


“Steel producers are lowering production by advancing capital repairs but stockists and traders continue to have slightly higher inventory. Even the SME (small-and-medium enterprise) sector, which usually keeps no inventories, is having stockpiles this time,” said Sushim Banerjee, director general at Institute for Steel Development & Growth (INSDAG).


Capital repair, which is the maintenance of the blast furnace of the steel plant, usually takes place in April. However, companies have advanced this activity to November this financial year citing weak demand scenario, according to industry officials.