In the 80s, one of the unique selling propositions of Motilal Oswal Financial Services was its ability to facilitate arbitrage trades between exchanges in Ahmedabad and Mumbai. For a time, one of co-founder Raamdeo Agrawal’s tasks was to relay price information on stocks listed in Mumbai to his clients in Ahmedabad.

“We used to buy shares in the spot market in Ahmedabad and sell them in the regular market in Mumbai. The price quoted in the trading ring in Mumbai was not immediately known in Ahmedabad because of the lag in communication, and my clients made a percentage or two on the arbitrage,” says Agrawal. The bygone era of physical settlements and open outcry would seem far removed from today’s world of mobile and internet trading. Yet, that is precisely how stock markets operated in India more than 25 years ago — before the National Stock Exchange of India (NSE) kick-started electronic trading in 1994.


The exchange, in its initial days, strove hard to introduce electronic trading through the VSAT technology and developed a proprietary National Exchange for Automated Trading, or NEAT, its screen-based trading system.


“Electronic trading and dematerialisation are the two most important milestones in the Indian capital market ecosystem to date,” says S A Narayan, non-executive chairman, Kotak Securities. 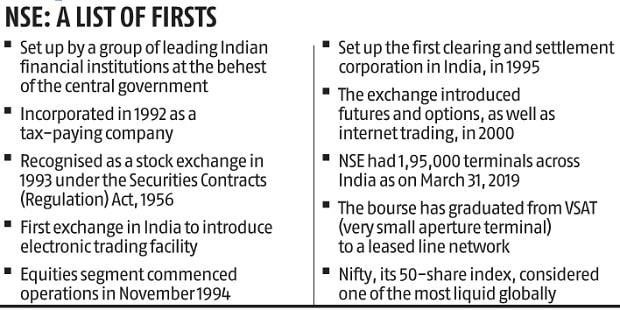 Until the mid-1990s, traders relied on the open outcry system to buy and sell shares. It was common to see brokers lugging wads of paper around — unsurprising, as transaction records were kept in the form of physical share certificates.


The biggest pain points were bad deliveries and unmatched transactions. According to Agrawal, five out of 100 transactions could be unmatched and disputes on bad deliveries would end up in arbitration. Regional bourses only traded in stocks of local firms. Investors who wanted stocks from exchanges in Mumbai or Kolkata had to pay in advance, usually via cheques. Delivery of shares could take even three months, and investors risked receiving fake share certificates. The Harshad Mehta scam dented confidence of investors further.


For one, traders comfortable with archaic methods such as kapali (handwritten trading slips) resisted the idea of automated trading. Getting more than 100 telephone lines for connectivity ran into roadblocks as MTNL (then Bombay Telephone) expressed its inability in providing connections at a short notice. NSE finally got around the problem through the use of VSAT after parleys with space and telephone departments.


“Once the electronic trading system was introduced, the trading volumes exploded,” says Agrawal. Until then, only the main broker and five or six of his sub-brokers were allowed in the trading ring. A person could, on average, handle 200 trades per hour. Since the capacity of the broker to execute trades was limited, the number of customers that could be serviced was limited as well. “As electronic volumes surged, participation of brokers and investors increased. Foreign investors finally got the confidence to look at India,” says Narayan.


Electronic trading helped cut out unknown middlemen and unnecessary commissions, even as the exchange opened doors to many who had worked under big brokers. These could now be a member of the exchange and start their own business. In a way, NSE helped businesses other than brokerages — including mutual funds (MFs), insurance firms, investment banks, and advisory firms — to flourish as well.


“NSE has created many firsts,” said Vikram Limaye, managing director and chief executive of the exchange in a speech on the Tuesday. “It was the first demutualised exchange in India. At a time when it took years to get a telephone connection, NSE set up a satellite-based pan-Indian network to ensure market access to investors in the most remote parts of the country.”


The exchange continues to deploy cutting-edge technology to improve market efficiency. It now offers an electronic filing system for listed companies, direct market access, and co-location services. The exchange has the capability to handle order messages processing over a billion messages and handles over 10 million equity trades every day. NSE has a digital platform for MF distributors as well.


It dominates the F&O, or derivatives, segment, which was introduced in the year 2000. Its efforts to promote internet trading has paid dividends as well — an estimated 40-45 per cent of trades are executed through internet and mobile trading in India, something unimaginable in the early or even the mid-Noughties.