Investor wealth to the tune of $2.1 trillion was eroded this week, amid rising trade tensions between the US and China. The world market capitalisation (m-cap), as complied by Bloomberg, fell to $77.8 trillion against $79.9 trillion a week ago.


China, the world’s second-biggest market, saw the maximum erosion in wealth at $624 billion, followed by the US, whose m-cap has declined by $367 billion this week. India, currently the ninth-biggest in terms of m-cap, has seen erosion of nearly $100 billion. The fall in India’s m-cap is much higher than bigger peers such as the UK, France, Germany and Canada. In fact, Germany overtook India’s m-cap, during this week.


Investors fear that the trade tension between the two biggest economies will make a dent in global economic growth and corporate earnings. Besides the trade tiff, uncertainty around election results and economic slowdown has weighed on Indian markets’ performance, say experts. 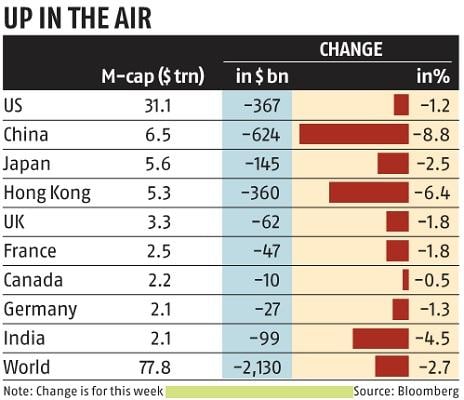