Indian shares rose on Thursday for the first time in three days, boosted by a jump in the shares of Reliance Industries (RIL), India’s most valuable company, on reports that e-commerce giant Amazon was looking to acquire a stake in the firm’s retail arm.


Added to this was a sharp rally in the US markets on Wednesday, which sent stock markets across Asia higher as risk appetite got a boost.


Shares of RIL rose 7 per cent to end at a new record of Rs 2,315. Incidentally, the company’s shares had rallied over 7 per cent on August 4 as well.


Though market sentiment was positive, RIL alone accounted for over two-thirds of the Sensex’s gains. This came a day after the company said it had secured $1 billion investment in its retail business from private equity firm Silver Lake.


News reports suggested that the company is offering a $20 billion stakes in its retail business to Amazon. A bunch of sovereign funds and private equity investors are also in talks with the company to buy stakes in the retail arm. 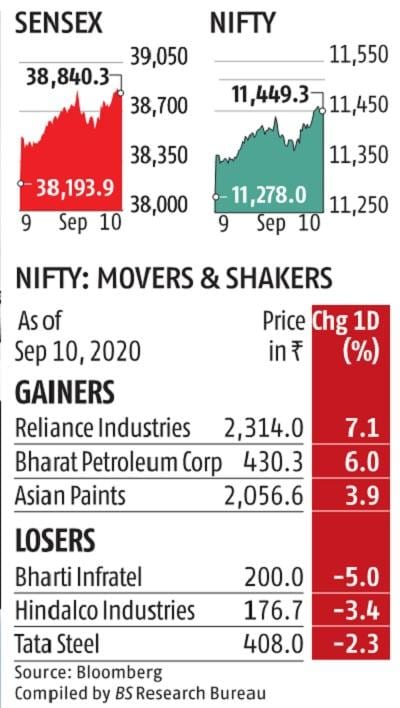 “Gains in RIL and positive global cues played a part in the broader positivity seen in the markets. Investors seem to have kept the simmering border tensions on the back burner for now and, in the absence of fresh triggers, will look at global markets and stock-specific news for direction,” said Vinod Nair, head of research, Geojit Financial Services.


After a sharp sell-off in technology stocks, the US markets recovered on Wednesday with the S&P 500 gaining 2 per cent, the most since June. The Nasdaq rose around 3 per cent.


Experts said investors are also keenly watching the outcome of the European Central Bank’s (ECB’s) policy meeting, where it is expected to announce its rate decision and its inflation forecasts.


“It will take a few more days before the global markets stabilise. Markets were hoping that the vaccine will come, and there is a setback, and the cases remain high. So you will see a stop-start pattern with regards to the opening of the economies. Also, markets have been banking on a further stimulus from US Congress, which hasn’t come,” said Andrew Holland, chief executive officer of Avendus Capital Alternate Holdings.


Investors, however, have largely ignored the negatives — like the global volatility, shrinking local economy, growing virus infections and a border clash with China — and the Sensex has risen about 50 per cent from its March lows.


The market breadth was positive, with total advancing stocks at 1,821 and those declining at 889 on the BSE.

2020-09-10
Previous Post: New home construction picked up the pace in August as builders started up again
Next Post: 4 Essential Rhythms for a Happy Business