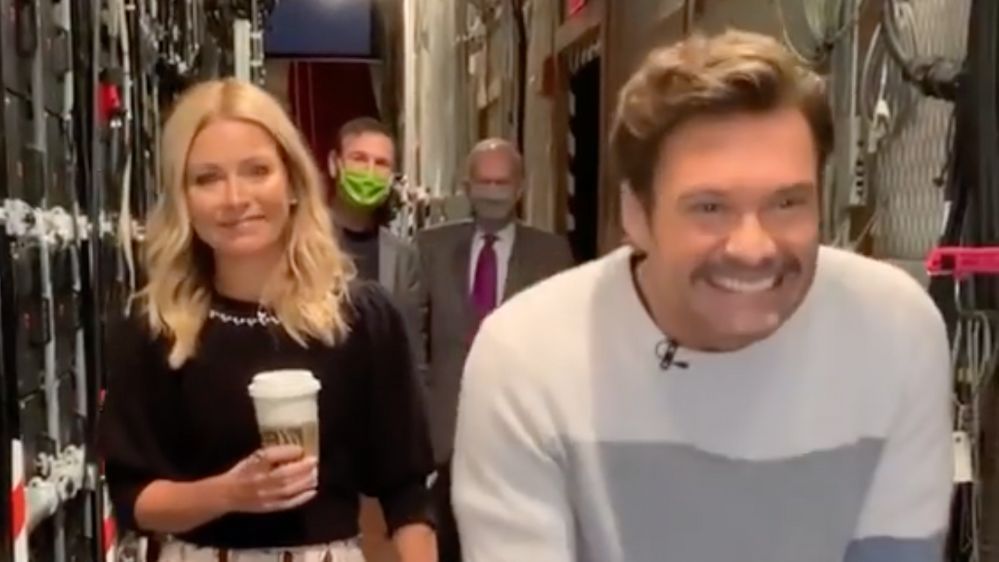 Viewers of Live! With Kelly and Ryan are throwing a massive thumbs-up to the syndicated talk show’s new face, seemingly a permanent one. Earlier this month, fans were introduced to media personality Deja Vu as the series’ new announcer, with each passing day bringing her return and a fresh spin on the show that’s now the most-watched morning one in America. Kelly, 50, and Ryan, 46, are now joined by Deja Vu and her DJ decks on a daily basis, and today’s video more than brought in the fan love. Check it out below.

Scroll for the video. Deja Vu, formerly known as Deja Parker and best known for her radio appearances, is now showing her face on TV, also making the series more ethnically-diverse. On Thursday, a video posted to the show’s Instagram kicked off with Deja Vu all smiles and pumped behind decks, and it’s been a daily deal – earlier this week, her music had former ballerina Kelly doing a “step ball change” as she taught American Idol host Ryan a few dance moves.

See The Video Below!

The upbeat video, shared just before Kelly and Ryan hit the air, featured Deja with her headset on and in a bold, stylish, and red sleeveless top. She was seen waving her arms around and definitely owning the camera, although footage did swing to Kelly, looking gorgeous in a dark top and long floaty skirt – both Kelly and Ryan approached the desk to kick the show off.

“Tune in now!” a caption read, and the comments have been coming in fast. See the response after the video.

Quick to reply was a user writing: “Love Deja!” with another saying:

While one fan didn’t quite get the spelling right, they did send  love, saying: “I love Daja!! She is so pretty & her smile will definitely put you in a happy place.” Kelly, who has hosted the series since 2001, now makes it a 2:1 on the gender ratio. More photos below.

Will She Quit ‘Live’?

Kelly, who made headlines recently for taking a week off and later celebrating husband Mark Consuelos turning 50, has hinted that she might soon quit the series. Last year, as she herself turned 50, the blonde opened up to Parade, dishing on what she’s been up to.

“I’ve been writing a lot, so my goal ultimately would be to eventually get off camera and start working behind the camera more in that creative aspect because I really do enjoy the writing process so much,” she revealed.